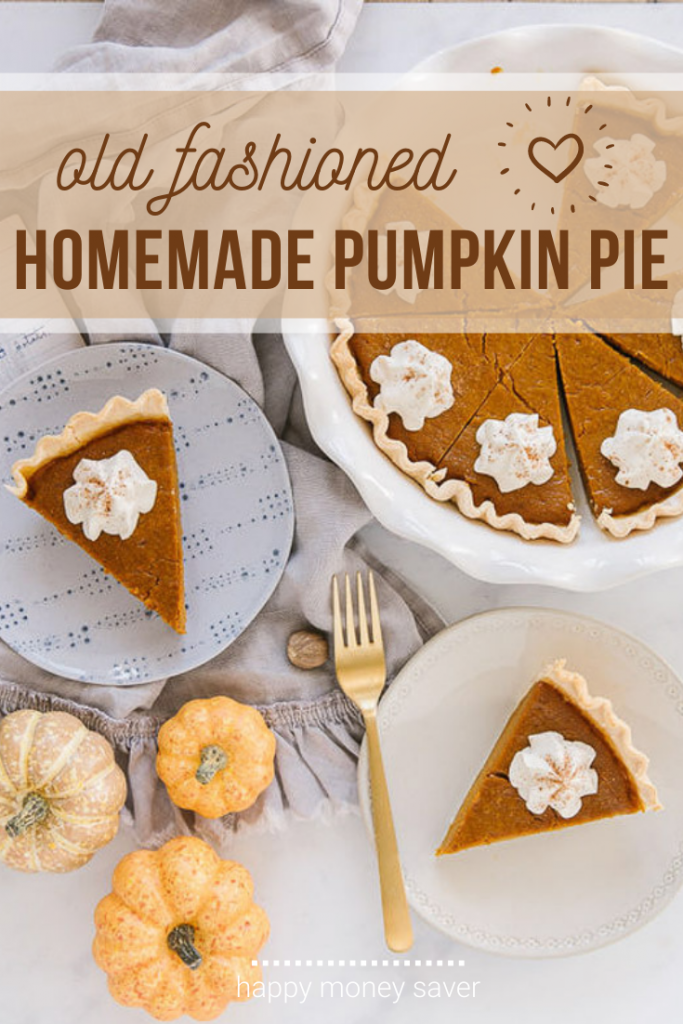 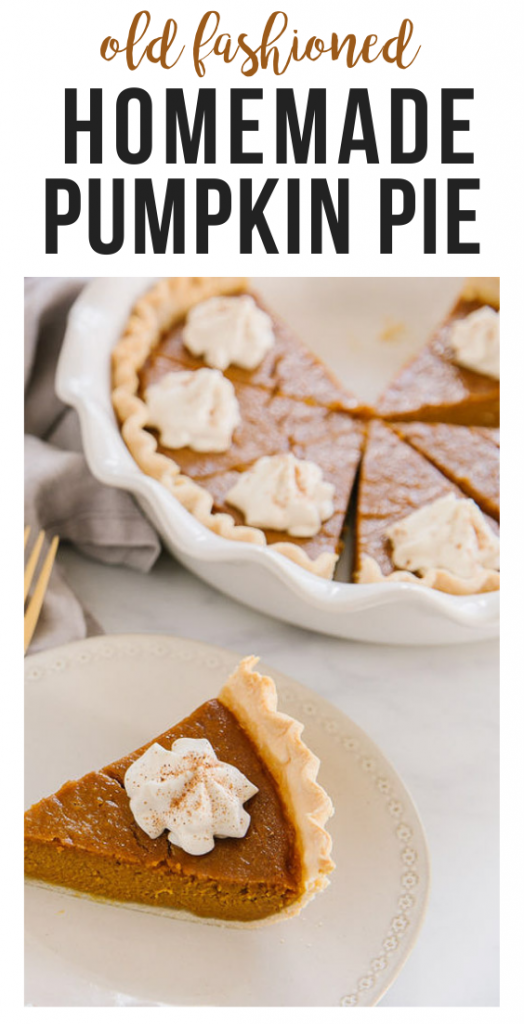 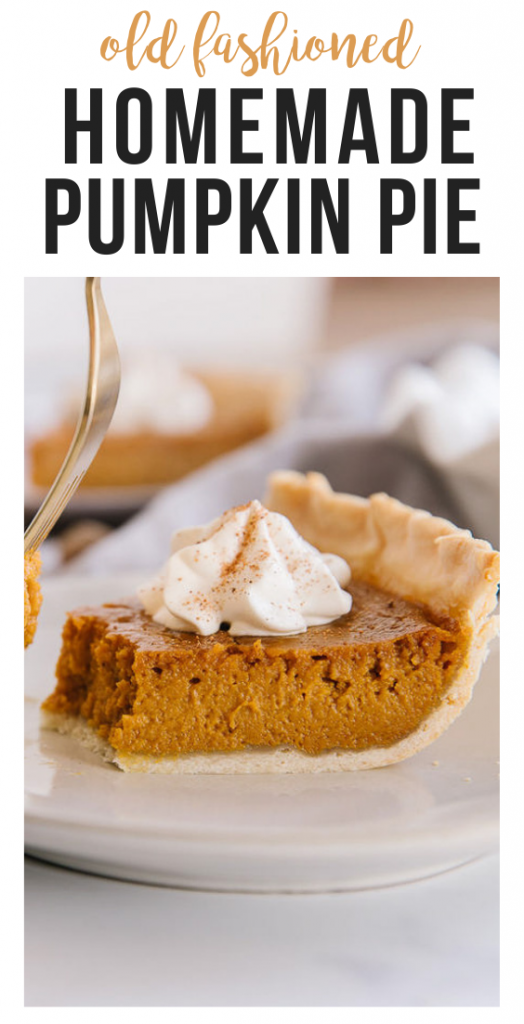 In all my life I’ve never found a better fresh pumpkin pie recipe. It’s that good.

The spices are perfectly balanced, the creamy filling is made from real pumpkin, and the crust always comes out flaky and tender.

As far as this recipe’s vintage goes, it actually dates back to 1900. It came from my great gran’s 1900’s recipe card and, sadly, without instructions. So it was interesting trying to figure out her secret to making old fashioned pumpkin pie from scratch!

Yep, it surely was an adventure figuring out how to make it. First of all, this is a pumpkin pie recipe with whole milk or heavy cream, but apparently in Gran’s days they called that ‘rich milk’.

Does Pumpkin Pie Need to be Refrigerated?

You’re making fresh pumpkin pie, not something full of preservatives. The combination of whole milk, and egg (AKA proteins) make pumpkin pies a breeding ground for bacteria. Store your pie in the fridge after it’s cooled for up to 3-4 days.

Now, if your question is whether or not you should serve pumpkin pie warm or cold, that’s up to you. Enjoy it right out of the oven, or pop it into the fridge for a few hours if cold pie is more your thing. Refrigerated pumpkin pie can also be warmed up in the microwave.

How to tell when your pumpkin pie is done baking?

There’s two things to check: the crust and the filling. Pie crust is done when it looks golden brown in color and has a flaky texture.

The pumpkin pie filling is done when it’s ‘set’. This means that it doesn’t jiggle when you move it, or when an inserted knife or cake tester comes out clean.

Since this is an old fashioned pumpkin pie recipe the ingredients are quite simple. You’ll need a pie crust, egg, sugar, strained pumpkin or sweet potato, and whole milk (or rich milk, check out the notes at the bottom for more on this). For spices you’ll need ground cinnamon, clove or ginger, and allspice or nutmeg.

With all these options maybe I should call this “whatever you have handy” pumpkin pie!

How to Make Old Fashioned Pumpkin Pie – Step by Step

Can You Freeze Pumpkin Pie?

Yes!! This is one of my favorite Thanksgiving life hacks. Pumpkin pie can be made ahead and will stay perfect in the freezer for about a month or two.

If you plan to freeze your pumpkin pie, bake it in a disposable aluminum pie pan. After baking, let the pie cool completely. Then wrap it in several layers of plastic wrap or slip it into a large freezer bag.

Thaw your pumpkin pie in the fridge at least 12 hours before you plan to eat it. Thawing at room temperature will give the pie soggy crust that might make your Thanksgiving guests think you’re not the amazing pie baker I know you are.

How to Cook Pumpkin for Pie?

Making your own fresh pumpkin pie filling isn’t as difficult as you’d think. All you need is a pumpkin, parchment paper, and a baking sheet!

The most important part is to start with the right pumpkin. The best ones for pies are labelled ‘sugar’ or ‘pie’ pumpkins. They’re usually smaller than the carving pumpkins you see in the big bins outside the grocery store.

Slice the pumpkin in half, clean out the guts and seeds, and then place your pumpkin halves cut side down on a parchment paper lined baking sheet. Bake them for about 45 minutes at 450 degrees. You’ll know they’re done when you can easily stab them with a fork.

Even though this is pumpkin pie with real pumpkin, you can substitute fresh pumpkin with canned pumpkin puree in this recipe too.

The best part about fall is pumpkin everything! If pie isn’t your thing, you might like these Pumpkin Snickerdoodle Sandwich Cookies. If you’re on a health kick, these Pumpkin Pecan Crumble Overnight Oats will do the trick to satisfy those fall cravings. Oh! And don’t forget to add this Pumpkin Spice Bread and these Pumpkin Rolls to your fall baking list. Last, but definitely not least, is another pumpkin pie style recipe from my grandma you absolutely have to try.

Did you decorate your Thanksgiving table with this delicious traditional pumpkin pie recipe? I’d love to see it! Tag me in your picture on Instagram @happymoneysaver and use the hashtag #happymoneysaver! 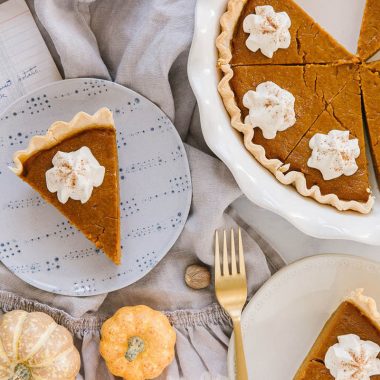 This recipe was originally posted on Nov 4, 2014. It has been updated with better photos and more tips on November 10th, 2020. 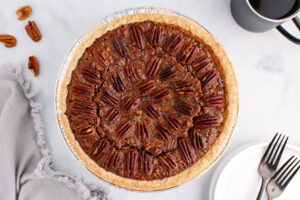 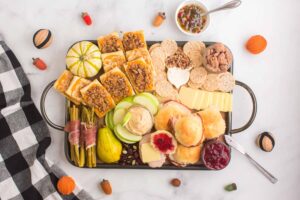 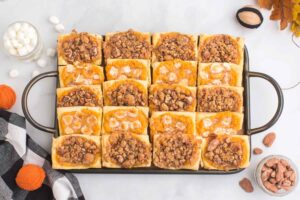 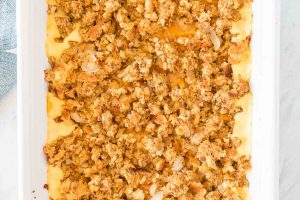