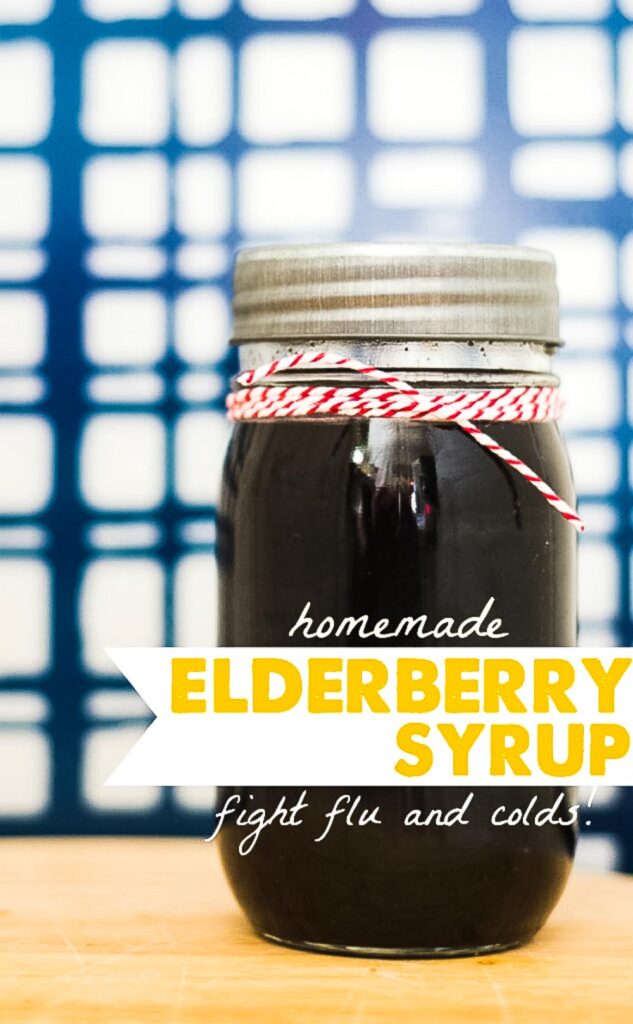 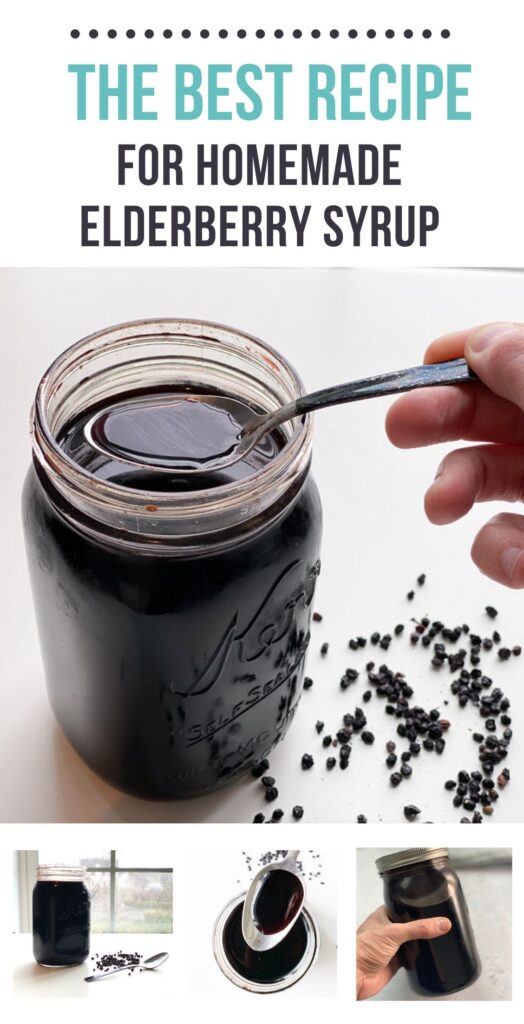 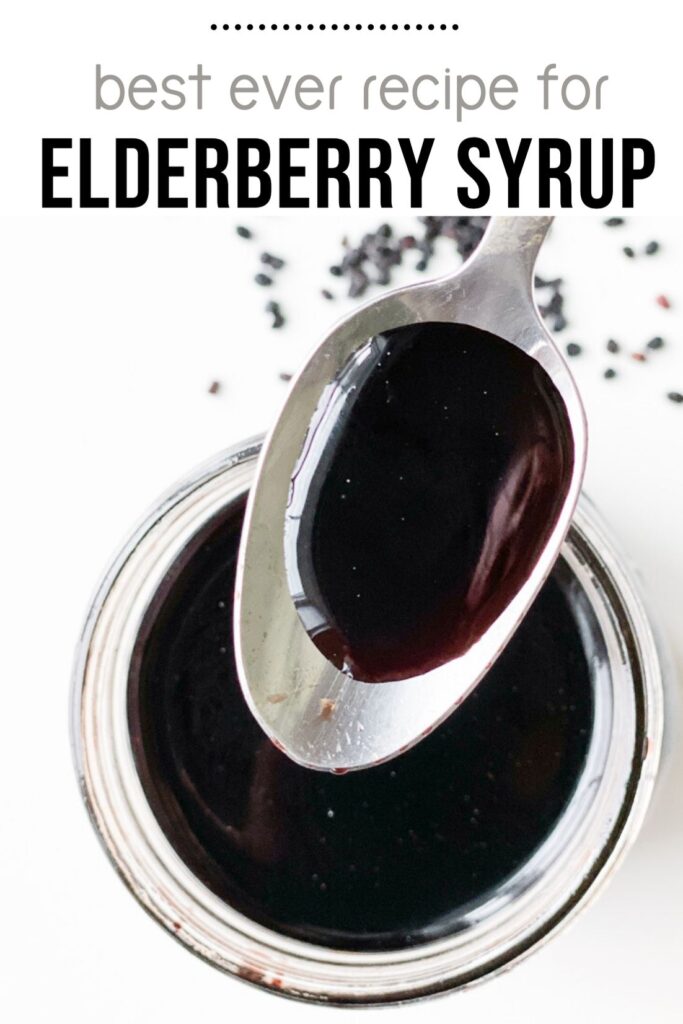 Black Elderberries (Sambucus Nigra) have been used for centuries as immune-enhancing remedies for colds and flu and as a powerful antiviral for treating viral infections. This elderberry syrup recipe is my favorite go-to-remedy and costs 98% less than buying it at the store.

Does Elderberry help fight the Flu or Viruses?

The truth is there are some studies that have shown the benefits of Elderberry.  More research is being done but the studies to date have been positive. This is not news to some people as Elderberry has been used in folk medicine for centuries to fight influenza and colds. In one study:

“Patients received 15 ml of elderberry or placebo syrup four times a day for 5 days, and recorded their symptoms using a visual analogue scale. Symptoms were relieved on average 4 days earlier and use of rescue medicine was significantly less in those receiving elderberry compared with placebo. Elderberry extract seems to offer an efficient, safe and cost effective treatment for influenza.” (Journal of International Medical Research, Mar-April 2004).

Another study found that elderberry supplements can reduce upper respiratory symptoms such as congestion and cough (Complementary Therapies in Medicine, Feb. 2019).

Elderberry is stuffed with antioxidants and high in vitamin C, high in dietary fiber, and high in anthocyanins, an anti-inflammatory. They have also been used to treat sciatica, head-aches, teeth pain, heart pain, and as a laxative, although I have only used to fight off colds.

I’m not a doctor so please remember I’m only talking from personal experience using Elderberry syrup. Consult your family doctor if you need to know more. Be sure that this will not interact with any other drugs you might be taking.

My Personal Experience with Using Elderberry Syrup for Colds & Flu

When one child would come down with a cold or flu, I used to run to the store and shell out money for precious elderberry syrup. I would give it to everyone (myself included), and the vast majority of the time no one else would get sick. Plus they seemed to get over it quicker too.

Seriously. I initially thought it was a fluke. Can it really work this well? But it’s proven itself over and over and over in my home.

As such, I wanted to be able to give it to my children as a daily supplement during the winter, but because of the cost it wasn’t possible. So when I discovered how easy and cheap it was to make my own, I haven’t gone back. It’s my homemade elderberry syrup recipe for the win!

The best part? My kids love it. LOVE it. When they see me pulling the jar out of the fridge in the mornings they all come running. PS – it also serves as a pretty tasty pancake syrup, just sayin’!

How Often Do I Give it To My Children?

In our family we follow the dose recommendations below:

If you feel a flu, virus or cold coming on simply take that same dose amount every 2-3 hours during the day until symptoms subside.

According to WebMD elderberry is possibly unsafe when the leaves, stem, unripe fruit, or uncooked fruit is eaten.  So you need to always cook your elderberries first. Unripe fruit might cause nausea, vomiting, or severe diarrhea. Save yourself some toilet paper and don’t eat raw elderberries.

How to Make Elderberry Syrup

Watch this video to see how to make Elderberry Syrup at home.

It really is so simple. And hard to mess up.

First thing you’ll do is add your water and spices to a large pot.

Bring mixture to a boil, reduce heat to a simmer, cover and let simmer for about 45 minutes, until liquid is reduced by around half. Remove from heat and let cool.

Strain out the berries and cinnamon sticks, and press down on the berries so you get all that good juice out. After it cools for an hour or so add in your sweetener and you’re done.

Then pour into a mason jar and refrigerate! It will keep for several months in the fridge.

How Much Does it Cost to Make?

At my local grocery store, a 4 fl oz bottle costs $16.99 or $4.25 per ounce. Pricey stuff, but I’m a sucker. This stuff is worth its weight in gold. And diamonds. And whatever is selling for the highest price on the black market.

That means our homemade version, without shipping is 98% CHEAPER! Seriously!!!!! This is one of my most cost efficient recipes ever. Even with paying for full priced shipping it’s still a heckuva save. 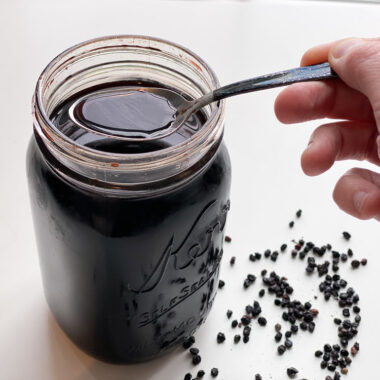 Dose recommendations: 1/2 tsp – 1 tsp once a day for kids over 1 years old. 1/2 tbsp to 1 tbsp once a day for adults.  If you feel a flu, virus or cold coming on, take the regular dose every 2-3 hours until symptoms subside. 1 cup = 4 oz. dried elderberries Make in Slow Cooker: Add water, dried elderberries, cinnamon sticks, ground ginger and ground cloves to the slow cooker. Cook on low heat 8 hours. Strain, cool and add honey.  Make in Instant Pot: Add water, dried elderberries, cinnamon sticks, ground ginger and ground cloves to the pressure cooker. Seal, and cook manually on high pressure for 9 minutes. Quick release and strain, mashing berries as directed above. Let cool for 1 hour, then add in honey.  Options & Substitutions:
Note: Cinnamon sticks, ginger, cloves and honey are all optional – they simply make it taste better.  If you don’t have cinnamon sticks you can substitute 2 tsp. cinnamon for the 4 sticks.  You can substitute sugar or glycerin for the honey (1-1/2 cups sugar or gylcerin), but if using sugar it’s best to add it after straining and mashing are done, while syrup is still warm so it will dissolve easier. Also feel free to add more or less sweetener to this recipe as it’s for taste only.

I hope you love this recipe! My kids love the taste, and the Elderberry Syrup recipe can drastically boost the immune system. Waaaay cheaper than the store bought version!